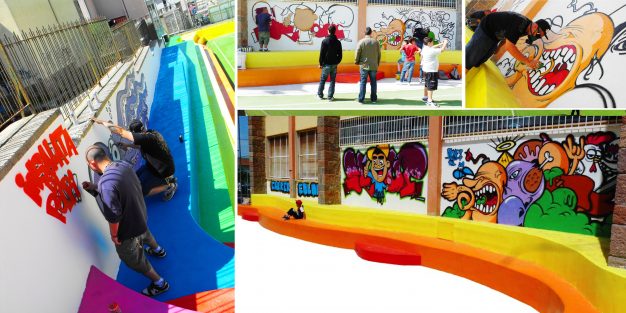 The ‘Portacolori’ – a play space located in the primary school in the Monte Rosello neighbourhood of Sassari, Italy – is the outcome of a real and complex participatory design process. The project involved the entire school community including 200 children aged 3 – 13, teachers, the director, school workers and volunteers represented by parents (especially women). Even the municipality, the Education Department of the City of Sassari played an active role: not only as the official sponsor, but as a genuinely committed stakeholder.

Designing a Public Space for all

The idea was to make a low-cost, inclusive transformation to enhance the quality of urban life in one of the most disadvantaged areas of the city, by involving children in the design process. TaMaLaCà aimed to develop a project that would provide an efficient answer to the realistic demands and requirements of the children, arising from their participation in the design, while, at the same time, supporting and enhancing the actual and present uses made of the space by its various other users too. So, the “Portacolori” is a kind of in-between space, close in nature to the well-known definition of Herman Herztberger: “The child sitting on the step in front of its house is sufficiently far away from his mother to feel independent, to sense the excitement and adventure of the great unknown.
The child feels at home and, at the same time, part of the outside world”.

Staying in the “Portacolori,” the user feels both inside and outside the school. The space is colourful, visible, well-lit, cosy and open to everyone. It is a playground, but not only: it is also an unconventional amphitheatre, a place where it is possible to get some sunshine, as well as to take some lessons, have school meetings or put on short performances. Colour highlights the public, “popular” character of the place, allowing it to emerge in a carefree, creative way from the widespread surrounding greyness. Furthermore, colour in this case is also an instrument of joyful contagion; it attracts glances, encourages games and free-time activities and brings these back into the public realm of the neighbourhood.

In this space, anything is standard: every part is designed to give answers to common problems in an unconventional way. Children, teachers and parents, as active protagonists of several design laboratories, provided the key to understanding the problems; while children suggested lots of design ideas, right up to the final design.

Interestingly, children who have been invited to present their design ideas did not want just a space to play and hang out with their friends, but also an accessible space for adults and older people. It was important also to have a clean place for the youngest children. Taking their thoughts and ideas into account, a space that can be accessed and used by everyone of all ages and generations has been designed. A space for all and of all.

There are no more physical or perceptive barriers, thanks to the use of new colours, shapes and materials. The “Portacolori” is a space where children can play, but above all it is an open-ended space. Beyond its strong physical character, it can suggest more and more uses: it is a space open to interpretation.