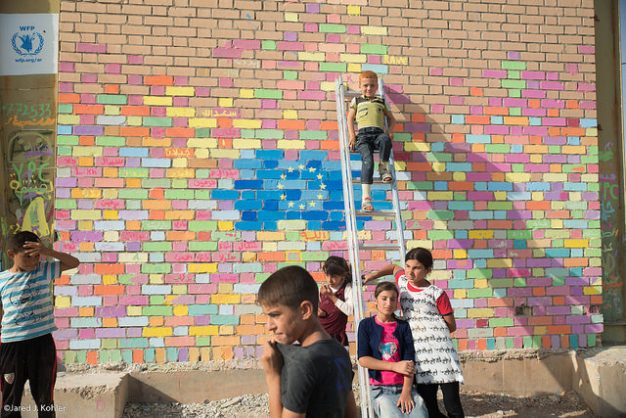 There has been much recent media coverage of the plight of refugee and displaced children, and rightly so. Of the tens of thousands of refugees worldwide, approximately 40% are children (APA 2010). Similarly, millions of children lack access to basic amenities and services such as water, health care and education, and often work in dangerous or exploitative jobs in slum conditions worldwide (UNICEF 2012). While the issues are complex and the problems many, much less attention has been given to programs that help children recover from and shape positive experiences within these contexts.

In 2010, the American Psychological Association identified effective services to refugee children and their families; these included rich, multi-cultural engagement that provides opportunities for dialogue, questioning, and adaptation to a group’s beliefs and values (APA 2010). A recent publication identifies protective factors that support childhood resilience – in war zones or other places of hardship – including self-efficacy, self-confidence, and bonds to socially active organizations or adults outside the family (Wells 2013). Two recent projects help support development of these protective factors for children and highlight culturally relevant and age-specific strategies for effective intervention with some of the world’s most vulnerable children.

In the refugee camp called Akre – one of eight refugee camps in Iraq that have housed Syrian refugees since 2013 – twelve teenage girls have been painting murals to creatively express some of the ideas and emotions about their experiences as refugees (Barbarani 2015). Supported by the Rise Foundation, the Castle Art project has worked with girls in the transformation of a former Iraqi prison to a creative and healing space over the past year. While the twelve girls have consistently worked on the project, many other children also joined in the painting and conversation.

According to Barbarani (2013), early images reflected the violence and death of the war they had experienced but, over time, these dark images shifted to ones that portray the brightness of nature, flowers, birds, and colourful handprints. Not only do the murals provide a form of therapy for the girls, but they also help transform a bleak prison setting into a place with an urban feel. The girls not only had the opportunity to paint but also received training in art, including education about graffiti and street artists such as Ban sky (Barabarani 2013). Through their connection to the Rise Foundation’s program, the girls are able to connect with a community organisation that helps them build confidence, develop hope and aspirations for peace, and to think about their own futures as artists and citizens – all fundamentally a part of effective healing and building resilience (APA 2010, Wells 2013).

Reminiscent of parkour, where young people appropriate the city environment for risk-taking, challenge and fun, in Ethiopia they are taking to skateboards in the city of Addis Ababa (Ethiopia Skate 2015). The smiles on young people’s faces, the camaraderie they build with others, and the crowds they draw on the streets, are evidence enough of the health and release they derive from this urban play.

The movement has been galvanized by Ethiopia Skate, a non-profit organization whose mission is to use skateboarding “as a means of building confidence, encouraging individual creativity, and making community” (Ethiopia Skate 2015). They provide an ambassador team of skateboarders who work with children and young people, mentoring them not only in skateboarding, but also in life. Megabit Skate similarly works with children who live in some of Addis Ababa’s worst neighbourhoods with children who are “hawking on the street,” in order to inspire and motivate them.   One of the young female participants says, “Skateboarding has made me more courageous and it has built my confidence” (AJ+ 2015).

The project leader says, “we don’t need thousands and thousands of dollars, but what we need is using what we have, and using it with love” (AJ+ 2015). His approach, and that of Ethiopia Skate, engenders resilience in children through its development of self-efficacy, self-esteem, and connection to sociable, appropriate adults. Elsewhere in the world, skateboarding receives mixed acceptance. But as Francisco Vivoni (2013:340) describes for the youth of Chicago, youth skateboarders can become agents of change for their cities: “skateboarders forward an alternative sustainability through bottom-up playful tactics that promote an ethic of care for built environments . . .”