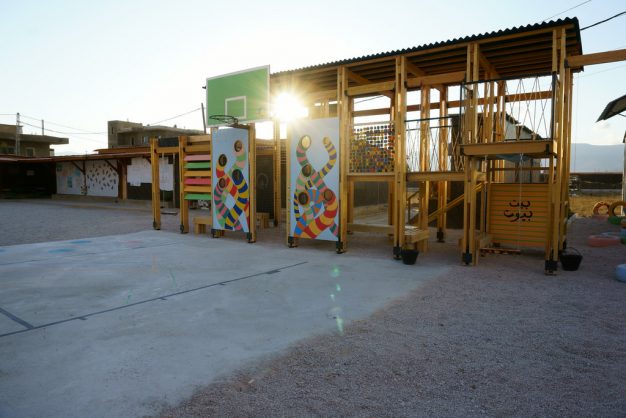 Syrian children fleeing to neighbouring countries add up to more than half of the total refugees. Therefore, there is a need for designing playgrounds to facilitate these children’s developmental needs. The ‘Ibtasem’ playground is a pilot project, coordinated by the “Catalytic Action” NGO and that has been completely funded by an international crowd-funding campaign and constructed by teams of volunteers in collaboration with the final users of the space – the refugee children themselves.

This project manages to respond successfully to both a humanitarian design need and a user-based design project challenge. On the one hand, it aims to raise awareness for the essential need for child oriented spaces in refugee camps, while at the same time it poses questions about the adequacy of commonly used playground equipment such as the swing, the slide and the seesaw

According to the latest UNHCR report (Dec2, 2015), Syrian children fleeing to neighbouring countries add up to more than half of the total refugees. This fact urges the design and construction of spatial contexts to appropriately facilitate these children’s developmental needs.

The ‘Catalytic Action’ team addressed this specific issue in the region of Békaa, Lebanon and decided to take action by initiating a community-based project, which was successfully completed in August 2015.

Since a playground is the ultimate space for outdoor play and recreation, the design of it should be tailored to children’s (user’s) particular needs. Therefore, engaging children in the design process is a brilliant way to capture their imagination and translate it into space and ambience. Creating a space that reflects their stories and ideas within the spatial environment demonstrates that children seek play elements that trigger their creativity; and that these are not necessarily the same play elements that are commonly and widely provided for by equipped playgrounds worldwide.

The ‘Catalytic Action’ team hosted participatory planning workshops where the children contributed their ideas to the final design of their playground; and also participated actively in the actual construction of the space. The final outcome of this process, The ‘Ibtasem’ Playground, provides a safe haven and a vibrant playscape to the refugee children where they can feel comfortable to express themselves, socialize and play.

The success of this project lies in its thoughtful programming and coordination. There are five main steps identified in the process of developing this project:

1. Articulate clearly the goal, which the proposed design project aims to achieve.

4. Organize and facilitate participatory Design–Build workshops in order to develop a design proposal that addresses adequately the final user’s needs.

5. Build the project together.