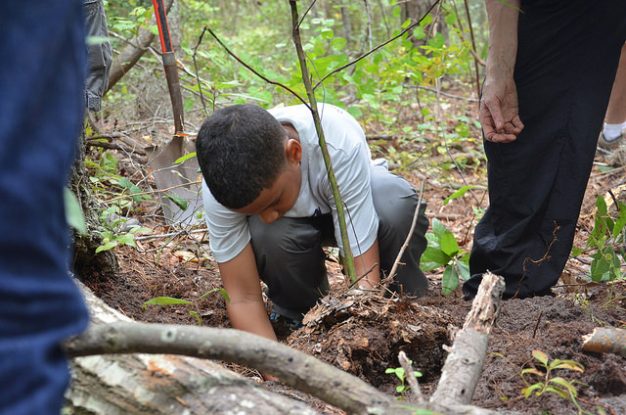 ‘One Tree Per Child’

Bristol is the first city in the world to roll out the ‘One Tree Per Child’ initiative, which will also involve experts going into schools and talking to youngsters about the environment. All of Bristol’s primary school pupils will get the chance to plant at least one tree as part of a global initiative launched by the pop star and actor Olivia Newton-John.

The scheme was launched on the 24 February 2015 in partnership with Bristol City Council. The city council will cover the cost of the trees and tools. If a school does not have spare land to plant its children’s share of the trees, the authority will find a plot for them.

Newton-John, who has planted over 10,000 trees at her home in Australia, said: “I believe that society benefits when young children get out, get their hands in the earth, and plant trees. It’s so exciting for us that Bristol is the first city in the world to roll out the One Tree Per Child project. In years to come, the children who plant a tree will be able to look back and say: ‘That was my tree – I really made a difference!’”

“Our plan is to plant 36,000 trees, that’s one tree for every child in Bristol’s primary schools. We’ve already planted 10,000 trees and we’re going to plant 26,000 more by March 2016. Local tree planting organisations, native nurseries, horticultural volunteers and community groups are also involved and helping out. It’s a truly community-wide effort!”

The plan is to achieve this by planting 12,000 free fruit trees,12,000 woodland and hedgerow trees and 2,015 specimen trees for parks and green spaces.

Lord Stern, patron of One Tree Per Child, said he hoped Bristol would be the first of many cities and towns around the world to adopt the policy of planting one tree per child. He added: “Having tens of thousands of children involved in tree planting will make Bristol a wonderful role model. If other cities follow Bristol’s example by planting one tree per child, millions of trees could be planted around the world.”