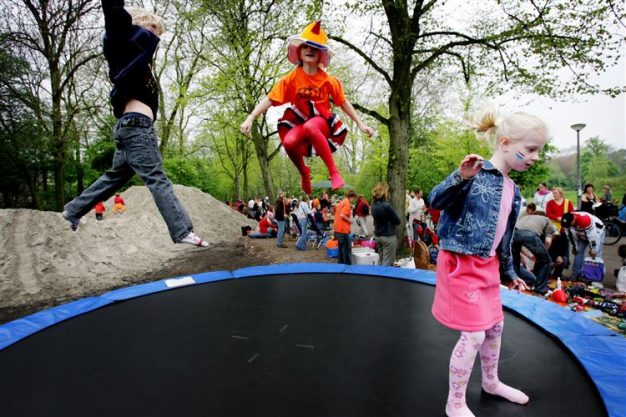 Urban developers and civic leaders in the Netherlands focus their efforts on creating environments that promote opportunities for physical activity and healthy living in the suburban parts of the country. The suburb of Huizum in the northern part of the Netherlands has been transformed to promote active living and to attract children to the new attractive play areas.

The way we build our cities, design the urban environment and provide access to the natural environment can be a great encouragement or a great barrier to physical activity and active living. Creating and maintaining an active city can help reverse human suffering and the high economic costs of inactivity in terms of health and social services.

“There is something special going on in the suburb of Huizum in the northern Dutch town of Leeuwarden. Seemingly soulless space is given a new meaning by transforming it into play area. Physical activity has become an integral part of a neighbourhood, suburb or a city, ” said Annemiek van de Grint, Nijha Expertise Center.

Today many children are experiencing a reduction in access and opportunities for play, and the consequences are being referred to as play deprivation.

“Many play areas are not recognized as such, let alone exploited as such. Spaces between formal play areas, sports fields, playgrounds and indoor sport facilities can, with a little imagination, give an excellent new impulse to physical activity in the neighbourhood, and not just for the younger but also for the older generations,” said van de Grint.

“Therefore playing and exercising should not be confined exclusively to designated places. Physical activity must be possible throughout the entire suburb.”

An increasing number of national governments have strategies for promoting physical activity that can legitimize and support efforts at the local level.

The Nijha Expertise Center, in collaboration with the Jantje Beton Foundation and the Municipality of  Leeuwarden, has transformed soulless spaces located in the suburb of Huizum into playgrounds that attract children like a magnet.

“Local children and residents were invited to participate in the development of the plans and were able to share their ideas about playing and being active in the streets of Huizum. After being acquainted with the neighbourhood and making an inventory of the popular routes, bottlenecks, and local popular places, potential play areas were identified,” explained van de Grint.

Play areas have been made more easily accessible and designed with play equipment to attract children.

Pedestrian crossings have been made child friendly by replacing the traditional black and white markings with lion paws and tiger stripes. These modifications also have a signaling function for other road users, improving overall safety.

The local park has been transformed into play area by adding playful elements.

“With all these transformations the goal has been to be creative and to implement all of the ideas that were captured by the children without jeopardizing the accessibility of the areas for the elderly or physically disabled.”

“The residents, including the children of Huizum are now able to enjoy their neighborhood in a playful manner,” concluded van de Grint.