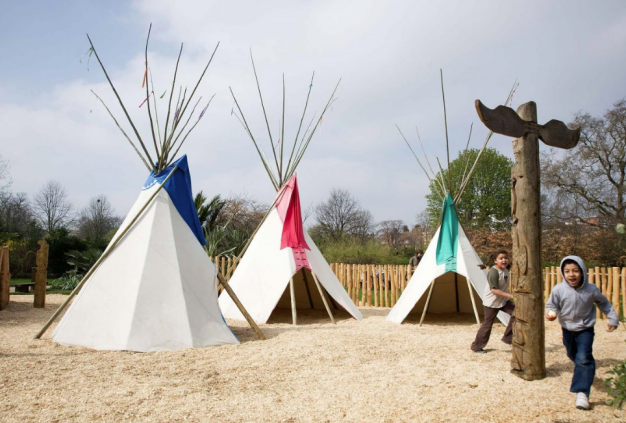 ‘Risky’ UK playgrounds cause a stir across the Atlantic

The designers of playgrounds in UK primary schools, communities and cities are increasingly building in a ‘danger’ element to show children that it’s OK to take risks in everyday play.

In what’s being seen as a fightback against years of legislation erring strongly on the side of safety-first, play areas in a host of settings are now being built with the specific aim of introducing ‘controlled risk’.

One school in particular, Richmond Avenue Primary and Nursery School in Essex, already has a well-established approach, four years after first swapping its traditional plastic playhouse for loose bricks, a tire swing and mud pit.

It’s even worldwide attracted media attention, namely in the USA, Canada and New Zealand for its way of thinking, proudly announcing on its website this week how the school & nursery’s ‘risk-enhanced procedures and activities’ was ‘causing a stir across the pond’.

The school, in the town of Shoeburyness, is encouraging children – under adult supervision naturally – to handle knives, scissors and other sharp objects which were previously restricted. It is an approach that has now been picked up by other schools in the area, including Thorpedene Primary School.

Leah Morris, manager of Richmond Avenue’s early year programme, is quoted by the New York Times as saying: “We thought, how can we bring that element of risk into your everyday environment. We were looking at, OK, so we’ve got a sand pit, what can we add to the sand pit to make it more risky?”

Some 60 miles to the west in central London, an enormous wooden pirate ship is the focal point of the Diana, Princess of Wales’ Memorial Playground at Kensington Gardens. The designers, inspired by the stories of Peter Pan, deliberately set out to encourage youngsters to ‘explore and follow their imaginations’, learning while they play.

The million or so visitors arriving at the entrance every year are greeted with a sign saying that risks have been ‘intentionally provided, so that children can develop an appreciation of risk in a controlled environment, rather than taking similar risks in an uncontrolled and unregulated wider world’.

This growing philosophy among playground designers also reflects the thoughts of Amanda Sielman, the chief inspector of UK school inspectorate Ofsted. She has previously described many of the health and safety measures brought in by schools as ‘simply barmy’. From this year, Ofsted inspectors will be trained to appreciate both the positive and negative sides of the whole risk element.

In a speech last year, Sielman said that in the run-up to school holidays, she had observed how the streets were full of children on school trips, and what marked them out from previous generations were the high-visibility jackets that they now wore, like ‘troupes of tiny construction workers’.

While she appreciated that schools might find it a convenient way of identifying their pupils, Sielman said the message it sent out about youngsters being at risk made her ‘uncomfortable and sad’.

“Children around the country walk to school every day without hi-vis jackets – why do they suddenly need them on a trip to the library, zoo or museum?’ she asked. “And surely if every child in the street is wearing one they are less useful than a school uniform for keeping track of a group? These jackets are just one of the more visible examples of good intentions creating an unnecessarily risk-averse culture which does nothing for children’s development and learning.”