Including children in designing post-conflict environments

The value of a child’s role in designing a post-conflict environment cannot be overstated. So believes architect Nerea Amorós Elorduy, who will be sharing some of her ideas and insights when she presents at the Child in the City World Conference 2018.

“The built environment is a social product that in turn shapes society and the individual beings that compose it,” says Barcelona-trained Nerea, whose professional and academic work connects architecture, placemaking and human well-being in post-conflict environments. “Architecture is a key tool to achieve human well-being and one of the ways of achieving that is by creating places,” adds Nerea. Ahead of the conference which takes place from September 24-26, she took part in one of our Q&A preview features.

Why is community participation in post-conflict environments important?

In many cases, the fabric of society after a conflict is left vulnerable and fragile. In such situations, to develop a truly participatory process to improve some of the built environment features that might have been destroyed or that might be missing is key, in order to rebuild old or build new social connections and spaces for peacebuilding. The issue though is how to make that participation to be transparent and engaged, to ensure that power imbalances are not replicated in the process but overcome, to ensure that all participants have the necessary knowledge to truly participate and form an opinion, and to ensure that there are no language or other communication barriers. 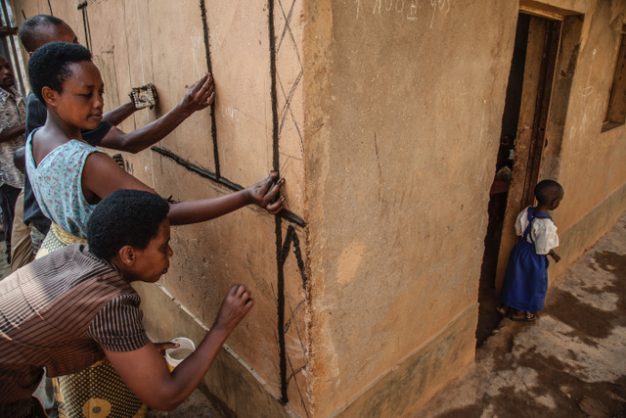 What role or value did the visual methods you used have in your data collection?

In my particular case studies, long-term refugee camps in eastern Africa, none of the refugee research participants have seen a map before, maps of the camps were previously non-existent and very few of the rest of stakeholders (NGO workers, host government officials and the UN) were used to talking about the built environment as a relevant factor in their work and daily life. In these cases, I used participatory action research to disseminate my research findings amongst all my research subjects and to try and enhance discussions where all stakeholders could fully participate. I used 2D maps, 3D-printed models and photomontages as means of disseminating my findings with refugee respondents at Kiziba refugee camp (a camp for DRC Congolese refugees established in 1996 in the west of Rwanda).

These visual and tactile methods allowed a discussion between UN, NGO and host government workers, refugee parents and teachers and children aged four and five years old. This information and these methods allowed me to see differences of opinion between adults and children and between different groups of stakeholders. These methods also allowed us to have conversations and reach a consensus on how to move forward with other participatory action research exercises we developed with a group of artisans and a group of students of architecture based in Rwanda.

Are there other people that you know of researching or developing guidelines regarding child-friendly settlements?

In refugee camp establishment and maintenance there is now a growing body of guidelines on child-friendly spaces and on early childhood development infrastructures. Even though these written pieces are still scarce they are fast growing. However, I find that in many cases they still omit the children’s voice. I also think that as long as camps are still considered as separate from urban environments, the studies, policies and practices related to refugee camps and their effect on young children are missing out on the wealth of knowledge that exists in this same field for urban areas such as the GUIC, the CFCI and the results from this conference.

True participation involving children is key to make cities better for all citizens. When spaces are made more child-friendly they tend to benefit the community as a whole. In the long-term refugee camps I have studied in south-west Uganda, Rwanda and north-west Kenya, resources are scarce. Participation, which is now extremely rare, has the potential to uncover the wealth of knowledge and resources that all those affected by encampment possess, including young children. My findings suggest that if these camps and all the new ones being built are to be more humane, children should be taken into account and should be the driver of change.

What is the main way in which events like Child in the City World Conference 2018 can help make a tangible difference to children’s rights?

I think that involving more practitioners (especially young minds) and the private sector, not only academics, in conferences such as this one can have the biggest impact in the actual shape and materiality of our cities. How can we revert the learnings accumulated in this conference to the cities we live in? What do the mayors, the urban planners and municipal architects from cities around the globe think of this conference? Are the results of this conference reaching the camp planners working in refugee and IDP camps?

Nerea Amorós Elorduy will be speaking at the 9th Child in the City World Conference in Vienna September 24-26. Her presentation is scheduled for Wednesday 26 September as part of the parallel session: Addressing disadvantage. Register for the conference here.

Putting young ‘city-zens’ at the heart of urban planning

How does a child ‘see and experience’ a city? Solve this and you unlock the secret to what really constitutes a child-friendly environment that works for everyone. It’s a question which urban planner Aminah Ricks works tirelessly to answer, and she will be sharing her experiences at this month’s Child in the City World Conference…. Read more ›

Children and media in a digital world

How do we balance children’s rights to cultural and social freedom with our duty to protect them from abuse and exploitation while also promoting a healthy and active lifestyle for children and young people?  One of the themes that will be discussed at the Child in the City World Conference is ‘Children and young people and media’…. Read more ›

A bilingual picture book that helps young children’s language skills will be showcased at next month’s Child in the City World Conference. Papperlapapp was originally devised by a team of child and design experts in Austria to help youngsters from migrant backgrounds help develop both their own language and German. It’s aimed at children aged… Read more ›