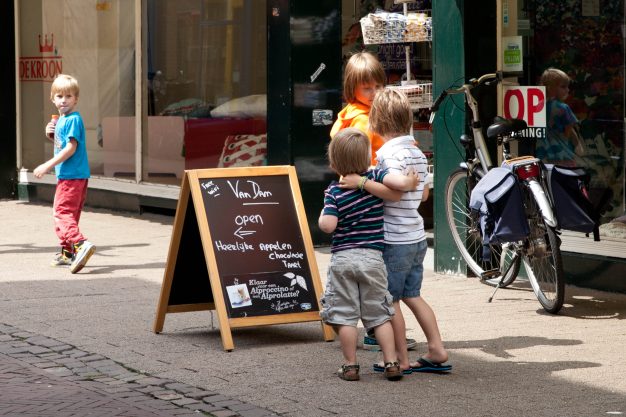 Why are Dutch children the world’s happiest?

Following UNICEF’s (2013) report of children’s wellbeing indicators for the world’s richest nations placed the Netherlands at the top of the list, a new book by two immigrant mothers explores what it is about growing up the Dutch way that is so good for their children. An extract from the book was published in the Telegraph and, here, the US blogsite ModaCity reflects on what lessons can be drawn from the Dutch experience

This past weekend, as if the universe knew we were longing for our days in the Netherlands, a story popped into our newsfeed touting that Dutch children are the happiest in the world. The article – an excerpt from a book ( published this week – looks at the lived experiences of two ex-pat mothers (one American and one British) raising families in the Netherlands, relating them to a 2013 study conducted by UNICEF that found Dutch kids topped the list for overall well-being when compared to the world’s 29 wealthiest countries.

Naturally, having recently experienced first-hand why they may have ranked number one, we shared the post with our audience – many of whom liked and shared it themselves. At a time when so many people in North America seem to be focused on raising healthy, happy, well-adjusted children, it looks like the Dutch have figured out the magic recipe – seemingly without much effort.

So just what is this well-kept secret that allows the Netherlands – along with many Northern European countries – to raise such happy children? And what steps can we, in North America, take to improve the lives of our own offspring

You can’t read a story about the Netherlands – including the aforementioned – without one simple fact being repeated over and over: many Dutch kids walk or cycle to school on their own as early as the first day of kindergarten. Having arrived in Rotterdam just as the school year was coming to a close last July, we can attest to streets filled with children travelling to and from school with their classmates, hardly a parent in sight.

Even as summer holidays began, we lost count of the number of youngsters roaming around their cities adult-free – something reserved for those in high school back home. What makes the Dutch experience so different is not simply a more relaxed approach to parenting, but rather a built environment that is welcoming, comfortable, and safe. High streets boast wide, separated cycle tracks, and neighbourhood streets feature traffic calming such as reduced speeds, special paint signifying that bikes have priority, and clearly identified raised crossings, forcing all road users to slow down for the vulnerable.

Reading this recent story reminded us of a tweet Melissa shared before Christmas, bemoaning how – at least in North America – we constantly talk about how kids these days “need to be more active” and “spend less time on screens”. Meanwhile, we’ve systematically taken away the freedom to be active by building our cities for cars.

By creating a streetscape where young kids are as welcome to travel as their adult counterparts, Dutch parents and children alike feel comfortable navigating their neighbouhoods, reducing the stress many of us in North America will admit is routine in trips to work, school and even the corner store. For parents, this reduction in anxiety is integral to the second step in the Dutch happiness equation.

Step 2. Inspire the freedom to roam

After years of bubble-wrap parenting (while we would argue we still have a long way to go), we have seen a shift in recent years that acknowledges healthier children are those who are entrusted with greater responsibility from an early age. It is now commonly known as “free-range parenting” (although the Dutch would just call it “parenting”). But with road conditions that would shake even the most steadfast adult, many parents – ourselves included – would admit the biggest concern with giving our children more freedom are the conditions of our streets.

In the Netherlands, after spending the last half a century correcting their mistakes, and giving space back to people, those concerns about dangerous streets have all but vanished. The comfort and ease of navigating their streets mean that Dutch parents freely allow their children the ability to travel outside of their watchful gaze. 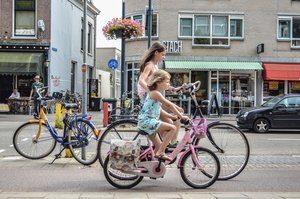 We experienced this sense of calm almost immediately upon stepping off the train in Rotterdam, our first stop in our #CyclingAbroad adventure. It inspired us to give our own children a little more freedom during our travels, letting them explore our adoptive neighbourhoods and parks while we enjoyed some quiet moments reading or socializing with friends.

Step 3. Accepting it is time for a cultural shift

The Dutch are not better parents than North Americans. We all love our children and want the best for them. Somewhere along the way, though, we took different paths. Where North Americans started building designated spaces for our kids to keep them away from ever-increasing traffic volumes, the Dutch fought to reclaim space back from the cars.

After the rates of children killed by vehicles sky-rocketed in the late sixties and early seventies, parents in the Netherlands began the “Stop de Kindermoord” (Stop Child Murder) campaign, effectively halting further plans to widen roads, and rebalancing the scales to give priority back to their most vulnerable citizens. By fighting for their children’s right to safety, the Dutch have built a culture that enables independence, attributing to their overall happiness.

But while this example of standing up for our children’s safety exists, North America seems to have simply stood back and accepted a motorized fate. If our children are to start enjoying the joy and freedom of their Dutch counterparts, we must acknowledge that it is time for a cultural shift.

We know our children need to be able to explore, to learn to assess risk, and be able to make decisions about their well-being without Mom or Dad doing it for them. Therefore, as a society, we need accept that our streetscapes can and must be safer places to roam, and that by building spaces that are safe and comfortable, we will be able to create a culture where we are at ease letting our kids be kids – on their own.

A paradigm shift where we return the ownership of the streets to people instead of cars is key to allowing that cultural change, and is imperative for the health and happiness of generations to come.

Step 4. Give children the credit they deserve

Ranking studies need to be taken with a grain of salt, or course, and a cross-section of just 29 countries is not a true representation of all children throughout the world. However, throughout our five weeks in the Netherlands, one thing is undeniable: Dutch children enjoy independence much earlier than our own on this side of the Atlantic. We have no doubt that this attributes to a greater sense of contentment.

We will continue our efforts to push for more equity on our streets, with the hope that by the time we have grandchildren, they can freely enjoy the responsibility we are now affording our children, but at a younger age.  In the meantime, we continue to draw back to our experiences in the Netherlands, reminding ourselves when our children ask to travel to school, the corner store or a friend’s house on their own, we need to be give them the credit they deserve.

While the routes they travel need to be improved upon, they have learned how to navigate them as safely as possible. The pride they exhibit being afforded that independence is something that can only be described as sheer joy.

With the overwhelming response we saw from a simple tweet about happy Dutch kids, it is clear that most adults know what is best for our kids here in North America – but is there a willingness to take the necessary steps to make it happen? One thing is certain: we will never stop fighting for our children’s most basic right – the right to happiness.

This blog first appeared on ModaCityLife.com

Reference
Acost, RM and Hutchison, M (2017) The Happiest Kids in the World – Bringing up children the Dutch, London: Penguin Books