Chat with us, powered by LiveChat

In Rotterdam, we are working full out on an attractive city with a strong economy. In doing so, we are also concentrating on attracting more affluent families to Rotterdam. That calls for the creation of sufficient suitable homes for these families, inviting areas on the street and first class schools. Therefore, we support, as much as possible, initiatives that contribute to this. We are doing this, of course, in collaboration with residents, investors, entrepreneurs, housing corporations, and other partners in the city.

Rotterdam is a young, attractive and dynamic global city, continuously renewing itself at a rapid rate. Sparkling skyscrapers, an impressive port, trendy restaurants and food markets, renowned museums and awesome festivals are the direct result of the can-do mentality of the Rotterdammers. Rotterdam has its share of surprising neighbourhoods and districts, each with its own distinct, strong identity. It is a city with such a variety of living environments that, regardless of lifestyle, age or cultural background, everyone can find a home there.

The second largest city in the Netherlands, Rotterdam lies on both banks of the Nieuwe Maas, the tidal southern arm of the Rhine, where it’s joined by the little River Rotte. It’s also the world’s largest port, home to the massive Europoort facility through which so much freight passes on its way to and from the continent. Although almost completely destroyed by German air attacks in 1940, central Rotterdam was energetically rebuilt after the war and re-planned with modern shopping streets, residential districts, and high-rises, making it one of the most modern and architecturally interesting cities in Europe. Despite its modernity, the city dates back to medieval times and was already prosperous by the 13th century when a dam was built to separate the Rotte from the Nieuwe Maas (hence the city’s name). Rotterdam has also long been important as a cultural hub, its early prosperity leading to the birth of Rotterdam’s most celebrated citizen, the humanist Erasmus, born here in 1467. Today, it’s as popular a destination for its vibrant entertainment options as it is for its many fine museums and splendid architecture.

The port remains an integral part of Rotterdam. This is a given after more than 400 years of trade and shipping success. Rotterdam, World Port World City, has Europe’s largest port which makes it the gateway to the European mainland. A staggering 450 million tons of goods are transferred through the port of Rotterdam each year, serving the needs of about 350 million consumers.

Rotterdam never sleeps, there is always something going on. Every year, new, original festivals are launched. New restaurants, bars, coffee bars and clubs are opening at exciting locations all the time. Leading museums and art institutions, such as the Museum Boijmans Van Beuningen and the Kunsthal Rotterdam, continue to attract attention with high-profile exhibitions. And also the range of shopping opportunities grow day by day, from famous international fashion stores to cool design shops selling products produced locally.

Today’s Rotterdam is a young, multifaceted and dynamic town. A breeding ground for creativity. Home to Europe’s largest port. Trendsetter in lots of areas. In short, there is always something to experience in Rotterdam. It is a city that is booming, buzzing and is never boring. Where there is space for everyone. And where the sky really is the limit.

What to visit in Rotterdam?

Rotterdam itself has much to offer but is also the perfect base from which to visit cities, nature, beaches and the attractions in the area. Get on your bike and/or take public transportation and you’ll find yourself there in no time: from the bustling Rotterdam Maasvlakte and the vast dunes of Hoek van Holland to the royal city and seat of the government, The Hague and the traditional Dutch windmills at Kinderdijk.

1. Grote of Sint-Laurenskerk
Great St. Lawrence Church – Grote of Sint-Laurenskerk – is all that’s left of Rotterdam’s medieval buildings, most of which were destroyed during WWII. In Grote Kerkplein, Sint-Laurenskerk dates from the 15th century and was built on once marshy ground giving the building a peculiar lean that was only halted after its foundation was rebuilt in 1650. Upon entering the church, you’ll be struck by the beauty of the bright interior, an effect heightened by the colored glass of its windows. The church is famous for its three Danish organs, the largest of which stands on a marble base on the inside wall of the tower. The bronze doors of the main entrance, on the theme of War and Peace, are by the Italian artist Giacomo Manzu, and in front of the church is a statue of Rotterdam’s most famous son, Erasmus. Guided tours and special tower climbs are available. Address: Grotekerkplein 15, Rotterdam. 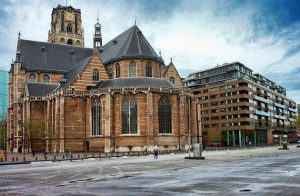 2. Museum Boymans-van Beuningen
Museum Boijmans Van Beuningen, one of the Netherlands’ most important art establishments, is known around the world for its superb collections of paintings, sculptures, and applied and decorative arts from across Europe. Painters of the 14th to 16th centuries are particularly well represented, with works by Hubert and Jan van Eyck, Hieronymus Bosch, and Pieter Bruegel the Elder. The 17th century is represented by Rembrandt and Rubens (26 of the latter’s works can be viewed), while later centuries are represented by Monet, Gauguin, and Van Gogh. Contemporary painters represented include Picasso, Matisse, and Chagall. Another museum of note is the Wereldmuseum Rotterdam, an ethnographic museum established in 1883 with excellent displays of artifacts from ancient and modern cultures from around the world. Address: Museumpark 18, 3015 CX Rotterdam
Official site: www.boijmans.nl/en/. 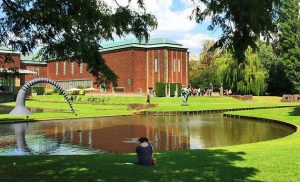 3. Kinderdijk’s Windmills
On the River Noord just 23 kilometers east of Rotterdam is the beautiful little village of Kinderdijk (the “children’s dyke”). Taking its name from a famous legend that describes a baby’s cradle being stranded here during the St. Elizabeth’s Day flood of 1421, it’s one of the most visited places in the Netherlands thanks to its 19 perfectly preserved 18th-century windmills, each designated as a UNESCO World Heritage Site. Built between 1722 and 1761, together they comprise the largest surviving concentration of windmills in the country, a history that’s celebrated during special Mill Days when their sails are once again set in motion. 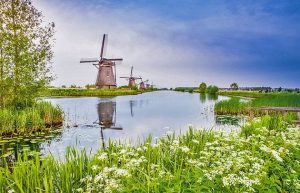 4. The Euromast
One of Rotterdam’s most distinctive landmarks, the Euromast lies at the north entrance to the Maas Tunnel. Erected in 1960, this 185-meter-high tower boasts two restaurants with superb views over Rotterdam, each at the 92-meter mark. For thrill seekers looking for more than just great views there’s the chance to abseil down the building, while those looking for a unique overnight stay can book one of two stunning suites located at the 100-meter point. (English language guided tours are available.) Address: Parkhaven 20, 3016 GM Rotterdam. Official site: www.euromast.nl/en. 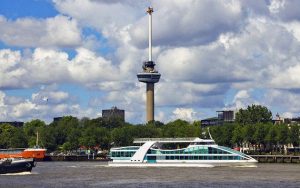 5. Better by design: The Cube Houses
One of Rotterdam’s most distinctive landmarks, the Euromast lies at the north entrance to the Maas Tunnel. Erected in 1960, this 185-meter-high tower boasts two restaurants with superb views over Rotterdam, each at the 92-meter mark. For thrill seekers looking for more than just great views there’s the chance to abseil down the building, while those looking for a unique overnight stay can book one of two stunning suites located at the 100-meter point. (English language guided tours are available.) Address: Parkhaven 20, 3016 GM Rotterdam. Official site: www.euromast.nl/en 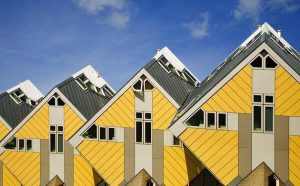 6. Europoort and Boat tours
Rotterdam’s massive port occupies half the city’s total area of 247 square kilometers, much of it in turn occupied by Europoort, a huge complex known as the Gateway to Europe. It’s a fascinating area to visit as part of a boat tour, and numerous tourist options are available sailing from various locations around Rotterdam, often in conjunction with tours of other parts of the city. In addition to countless massive ships, you’ll see mile after mile of quays and storage facilities built to service the world’s busiest port. One of the most popular excursions begins at Maeslantkering near Hoek van Holland (Hook of Holland) and includes a close-up look at the city’s massive surge barrier. Evening tours are also fun, especially with Rotterdam’s most famous landmarks, including the superb Erasmus Bridge, being spectacularly illuminated. 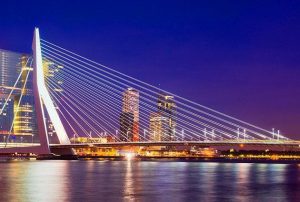 7. Markthal
You’ll find an indoor market hall in various world-class cities, but the market hall in Rotterdam is one of a kind. The combination with luxury housing and about 100 fresh food stands, nearly 15 food shops and various restaurants makes the venue unique. It is a real eye-catcher. The apartments are draped over the food market in a horseshoe configuration and it has an amazing artwork sprawling across the ceiling: the ‘Horn of Plenty’ by Arno Coenen and Iris Roskam. Thanks to this grand span of art, the Markthal has been referred to as the Dutch version of the Sistine Chapel. The Markthal is open seven days a week until 20:00. 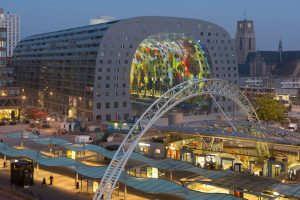 8. Sea-Themed Museums and the City Center
Established in 1873, Maritime Museum Rotterdam provides a fascinating look into the city’s connection to the sea and its many waterways. The museum boasts a large collection of material on the history of shipping and seafaring, including ship models, a reconstruction of a 2,000-year-old vessel, and numerous seafaring paintings. Another marine-related tourist attraction is the adjoining Harbor Museum, an open-air facility that’s home to the wonderfully preserved 19th-century Buffel, an ironclad ram ship, as well as an old lightship (all told, more than 20 historic vessels are on display). Both facilities offer English language guided tours. A recent addition to Rotterdam’s roster of important old vessels is the SS Rotterdam, launched in 1958 and considered the finest Dutch-built passenger vessel. A truly memorable experience is taking lunch or dinner aboard this sumptuously decorated vessel, which is now a hotel and museum. 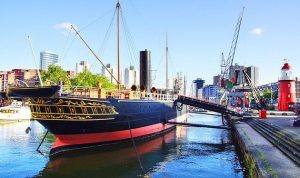 Walk about eight minutes north from the Maritime Museum and you’ll come to Coolsingel, the main street of Rotterdam’s city center. Here, you’ll find the Town Hall (Stadhuis), built between 1914 and 1920 in Dutch Renaissance style, with a handsome tower graced by a carillon and a richly decorated interior. Opposite the Town Hall, in Stadhuisplein, is a war memorial designed by Mari Andriessen. Other Coolsingel highlights include the World Trade Center, a high-rise building with a facade of greenish-blue glass, and the Bijenkorf (“Beehive”) department store (by Marcel Breuer, 1958). Fronting Bijenkorf is the 26-meter-high work of sculpture, Construction (1957), by Naum Gabo, a French sculptor of Russian origin. Wander a few blocks northwest from Bijenkorf, and you’ll come to De Doelen, a concert hall and congress center rebuilt in 1966 after its destruction in 1940. It offers seating for 2,200 and excellent acoustics. Nearby is the Schouwburg (Municipal Theater), which opened in 1988. Address: Leuvehaven 1, 3011 EA Rotterdam. Official site: www.maritiemmuseum.nl/en